Thrillist has another awesome beer list. This time, they’ve ranked the best beer bars in the land. We’ve given you a sample of the list below.

Located on the West end of the booming Division Street restaurant explosion, Apex is about as Portland as a beer bar gets. It’s strategically set up on a commuter corridor, making it an ideal bike-up joint. When the rain stops, there’s a sprawling, picnic table-strewn patio, where food from the vegan-friendly (and carnivore-approved) burrito spot next door is more than welcome. Inside, lit by the glow of ephemera and the digital draft board, is an impeccably curated row of 50 taps, which veer local but also include hard-to-find offerings from the likes of Evil Twin and Ballast Point, and imports from Germany, the Netherlands, and Belgium. Kegs tend to blow fast. Luckily, Apex has a real-time tap updater online, so in the event that they get something super rare — which they will — you can check in on it before saddling up on your bike. Which is probably a fixie. Because you’re in Portland.

Everything’s bigger in Texas, and that includes beer gardens. In a monstrous feat of brew selection, they’ve assembled a team of 100 taps, over half of which are seasonal and limited releases. To make the menu less intimidating, they’re organized by flavor profile (light & refreshing to dark & roasty) and every beer has an elaborate description to let you know what you’re getting into. If the beer wasn’t enough, there are also bonuses like a massive patio, live music, a dog-run, and insane sausages ranging from turducken to bulgogi. 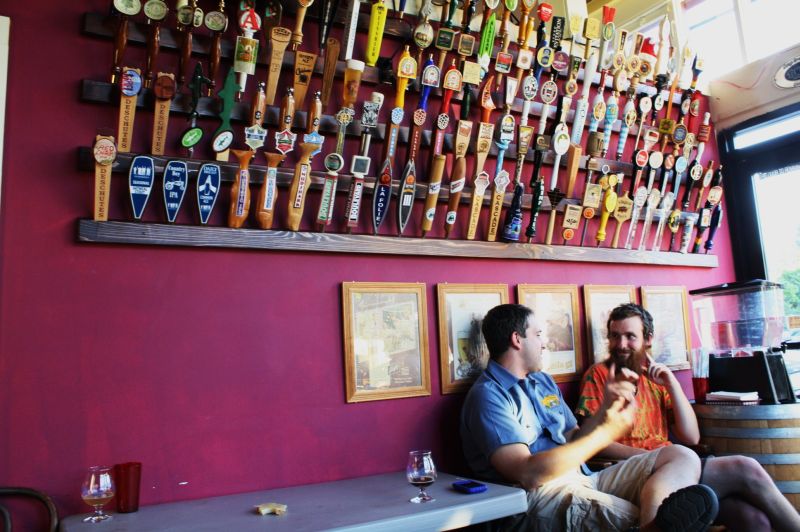 Portland’s got enough great beer bars to fill up half this list, but no such list is complete without Belmont Station. Like Cameron Frye’s house, the place is cold, and like a museum. Except you’re allowed to touch (and drink!) everything. That includes 1,200 bottles from every corner of the world — among them whole sections of Belgians and Germans — plus seasonal one-offs and rarities from America’s best brewers. Basically, if a beer is available in bottles on the West Coast, Belmont Station has it. Even better, you can pop those bottles in the Biercafe next door, which includes 20+ taps that always feature Belgians and small-batch miracles from Stumptown’s best brewers, many of whom use Belmont as the unveiling spot and testing ground for new creations.

One of New York’s early craft beer adopters (all the way back in 1995, which is like 100 years ago in craft beer years), Blind Tiger might not have 900 taps and robots operating a digital list, but they do have a focus on quality over quantity that serves as a fine example of what a beer bar should be. 30+ taps constantly change, with extra love given to East Coast beers like Peekskill, Brooklyn, and Other Half, and frequent tap takeovers allow brewers to put forward their best, brightest, and rarest. The bottle selection ranges from grand crus to saisons and rare imports, which could be confusing to the non-snob if the staff wasn’t so damned friendly and knowledgeable, making Blind Tiger one of the rare places that serves pints without condescension. Also, for the record, their wings are among the city’s best, though all the small plates at the spot are meant to pair with beer, and the menu — like the tap list — is prone to change daily.

We know, we know. We’re all up on this DC beer bar, which is named after the old-school beer-opening apparatus. But you know what? When one of your resident beer experts names it among the best damned beer bars in the world, you tend to become a groupie. Especially when 55 draft lines and 500+ bottles represent some of the best brews from across this great nation, plus an international delegation of world-class offerings that make Churchkey look like the United Nations — except in this version, Sam Kahamba Kutesa really knows how to throw down.

Sure, it’s a little odd to call a small Maine town with a population hovering around 1,000 a beer destination, but even if Ebenezer’s was located in the seventh circle of hell (or, even worse, Gary, Indiana), we’d be flocking. The place offers up more than 700 bottles and a Belgian-intensive tap selection in a cozy house that could easily be mistaken for one of the many farmhouses that double as bars in the Belgian countryside, apart from the uniquely Maine sight of snowmobiles parked outside during the winter. The place has so much clout that in 2007, the brewers at Belgium’s De Struise brewery took notice and developed Black Albert — a royal stout considered one of the world’s finest — just for Ebenezer’s.

When many people associate the words “farmhouse” and “Vermont,” they tend to think of their hazy memories of a Phish concert. Thankfully, this is not that farmhouse, because cluster flies ruin beer. There are only 24 taps here, but each one is carefully selected, featuring great beers from Vermont (Lost Nation, Hill Farmstead, and Hermit Thrush), plus the likes of Cigar City and Green Flash repping the rest of the country. On top of that, tap takeovers let brewers rip, and homebrew competitions are held for those looking for undiscovered comforts. There’s a grill that serves up excellent farm-to-table fare, but if you’re more inclined to sip a pint and casually snack, hit up the basement bar, where a fireplace can warm your body as you warm your belly with a can of Heady Topper (if you’re lucky!).

Yes, the name is pun-tastic. Yes, the fact that it inhabits an old turn-of-the-century (no, not the 21st century) Unitarian church makes the name almost TOO appropriate. But none of that would really matter if they didn’t back it up with the beer, which they most assuredly do, especially in the choir loft, with limited seating, limited hours, and a small tap selection of one-offs and rarities. The fact that there’s bone marrow poutine involved doesn’t hurt either. One could describe it as sinfully good, but that’d be overkill.

Don’t let its setting on a sleepy tree-lined street heavily populated by the stroller set fool you: this place is badass, from the high-volume heavy metal to the 30-strong, Midwest-heavy tap list deep with deep-cuts and hits from the likes of Bell’s, Three Floyds, Pipeworks, and more (including a few selections of their own, which are contract brewed off site and damn tasty as well). If for some reason you feel the need to go beyond the draft list, they boast an excellent collection of large-format treasures. Also, tater tots. Get some tater tots.

It’s a little-known fact that folks in the Boston area like to drink. And while there are tons of great beer bars in the city — Sunset, Bukowski, and Mead Hall, we love you dearly — our hearts and livers belong to Lord Hobo. Some beer bars have them bested in terms of quantity, but the 40 taps at Lord Hobo offer up a little bit of everything, whether you’re looking for an imported pilsner or something a little different like, say, an ale seasoned with a variety of peppercorns, or an Allagash tripel aged in Jim Beam barrels. Throw in a menu that jumps all over the board (tom yum chicken sausage and duck cassoulet hold court alongside savory popovers and pork roast), and you’ve got a place that guarantees your beer belly will be aptly filled by the time you leave.