Welcome to Bellingham Brewed Reviews, where we review ONLY beers brewed in Bellingham. Opinions held here are not necessarily those of Tap Trail.

On a similar theme as our most recent review, today we are visiting another Single Hop brew. The soon-to-be 21 year old Boundary Bay Brewery has been doing a series of single hop beers for a few years now. The malt bill (the basic grain recipe) for this series remains the same: a basic 2-row malt, some German style Munich to add a bit more of a grain character and bit of color, and a small amount of wheat, which helps with head development and retention. This consistency across the series helps showcase the attributes of the various hops used. In this case, the Galaxy hop.

Galaxy hops were developed in Australia during the 1990’s, and after the evolution and experimentation periods were over, were first hops were made available to brewers late in the first decade of the 2000’s. Galaxy hops have quickly become a favorite for many brewers, mostly due to its fruity aspects. Often featuring a component similar to Passionfruit, this hop also can show some citrus, pineapple, floral, and peach flavors, depending on how the brewer uses it. 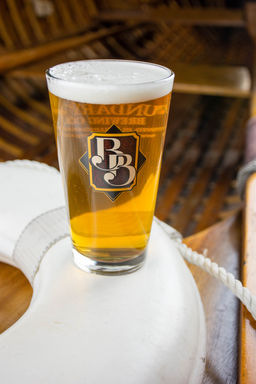 This particular brew was served up in a regular shaker pint glass, and poured a clear light gold color. The approximate ¼ inch of head that topped the beer was just off-white, dissipated over a couple of minutes, and left light lacing on the sides of the glass. There was a noticeable grain scent in the background that provided a good foundation to support the hops. While I didn’t get any Passionfruit through the nose, there was certainly a citrus tone, and an underlying fruitiness that was quite pleasant.

Once I started quaffing this ale, the grains were definitely the opening act in this twin bill. Pleasant, earthy, and lightly noticeable, the malts quickly finished their set and made way for the headliner. The spotlight shone brightest on the citrus aspects, but the fruit facet easily shared center stage. For me, the citrus had the front portion of the palate, in a mildly juicy way. In the middle, the light tropical flavors were dominant, and a tart grapefruit finish lingered pleasantly at the back. The combination of flavors made for an interesting encore.

As has been the case for this series of beers, the body was on the lighter side of medium for a Pale Ale. Smooth, even, and clean, the beer was very pleasant in the textural aspect. The finish was mostly dry, although there was just a hint of sweetness, and clean with no reason to not encourage you to have another sip. Drinkability was very nice, which made a couple pints great companions to a few innings of Mariner baseball (curse you Red Sox!).  I could see this beer going well with a bowl of steamer clams or a pizza.

Overall, I really enjoyed this beer, as I have the majority of the series. It’s interesting compare how the hops vary, and how similar some varieties can be. I recommend trying any of the various single hop brews that our local breweries put out. Each brewery takes their own approach, and it can be intriguing to see the differences the same hop can put forth. I enjoyed the way the hop was featured in this beer, and how easy and enjoyable it was to drink.