Welcome back beer advocates, associates, achievers and admirers. It has been a little bit since I’ve posted a beer review, I have been traveling and haven’t gotten to sit and write about many of the beers sampled. I wanted to take this in a different direction and post a review of an entire brewery, while adding in some simple reviews about a few beers from that brewery.

Now this isn’t the first we’ve heard of pFriem and certainly won’t be the last. They are doing all the right things and pumping out a very solid, diverse lineup of beers, and a budding sour program is just getting underway. It would appear the sky is the limit. Solid lagers are plentiful, as well as awesome Belgian inspired Saisons and strong ales, and a solid hop focused selection of IPA’s and Pales. A slightly staggering array of well put together beers across a broad assortment of styles and packages. 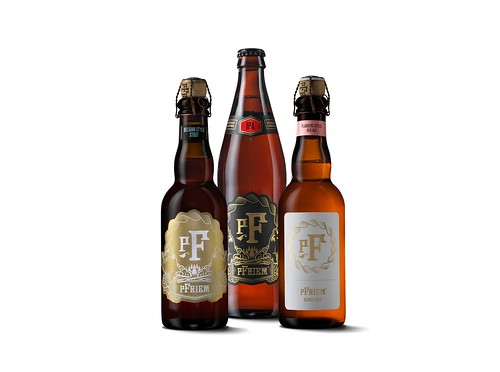 My wife and I were in Portland last week and made the quick one hour trip out to Hood River. It is seriously one of the nicest drives you can make, right along the Columbia River, the scenery is staggering. We had a lazy morning in Portland and left for Hood River around 11:30 or so, the drive out took only about an hour, but could have been longer had we taken the Historic Columbia River Highway and visited the Vista House.

We got into Hood River, took a couple of turns and before we knew it we were at the brewery. Surprisingly subtle on the outside, we parked in front and wandered along the Hood River Water Front Park, out along the Hook, and took in the scenery for a bit while we decompressed from the time in the car. The weather was surprisingly hot, serving as a simple reminder that we’ve got it pretty easy in Bellingham. 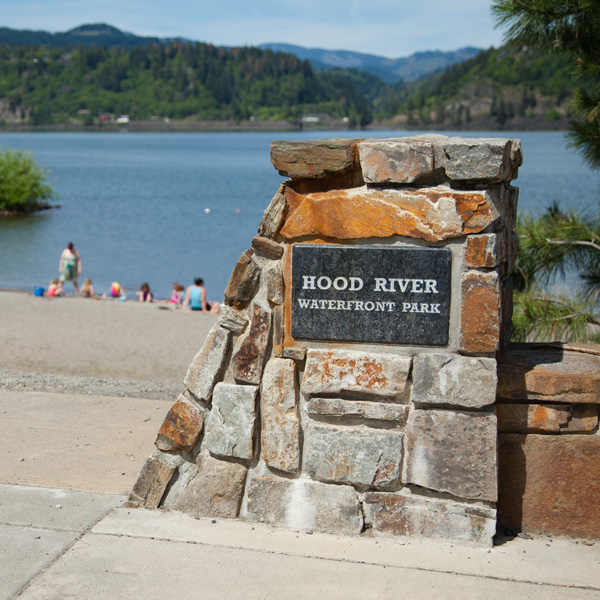 After wrapping up along the waterfront we headed across the street and into the brewery. A sprawling space with rows of tanks visible from every seat in the restaurant, a decent size main bar with well presented beers and taps. Lots of natural woods and clean bright stainless make up the space. Towering ceilings make the space feel large and airy.

You can see how the tank space has grown over time, simple layout and really makes you feel like part of the brewery. 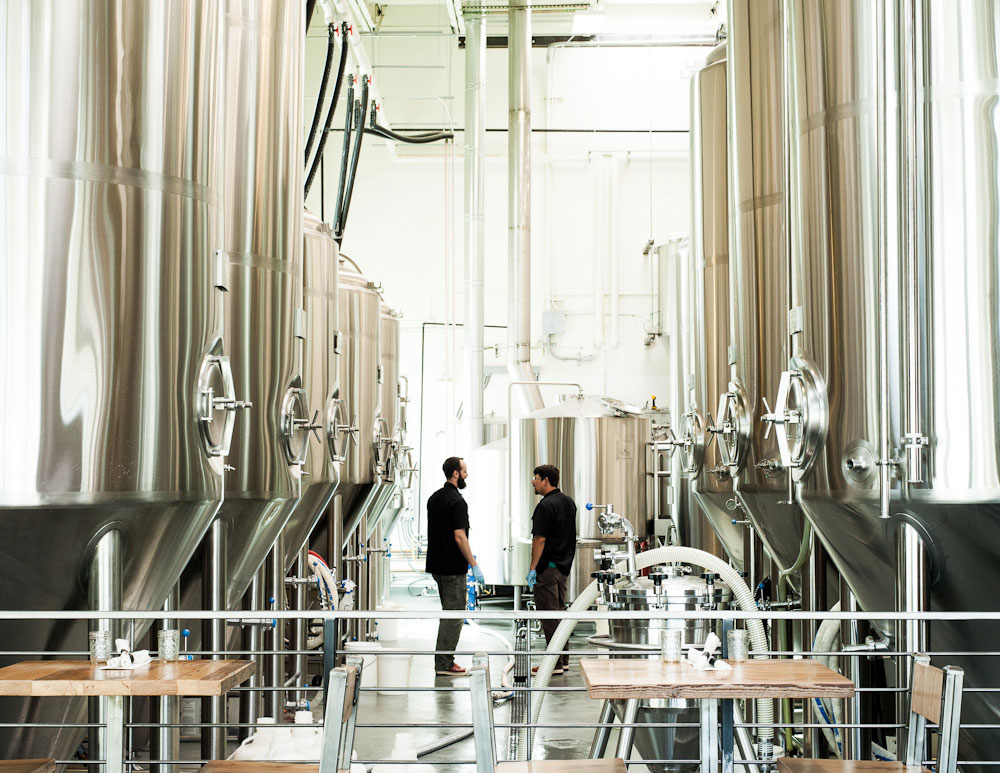 We found our way out to the sunny patio and grabbed a few different beers to get started. A nicely done flight board quickly arrived. We decided to keep it light as it was 90º outside and we still had to trek back to Portland.

We had their Pilsner, Helles, Wit, and Frambozen. Full disclosure, pFriem Pilsner is my 2nd favorite Pilsner, after Chuckanut. Josh pFriem clearly learned how to make a fine Pilsner from his days with Will Kemper at Chuckanut, that is for damn sure. The Helles lager was a nice segway from the Pilsner, bringing a bit more earthy and a shade less bitter, it was very clean and showcased the Lager yeast very well. The Witbier is one in a category that gets often overlooked and pushed aside here. It has been a struggle to find a good Witbier produced locally, we all get it, its the land of the hops, but there is still a place for a damn good Witbier, like this one here, bringing subtle sweet wheat notes balanced with a zesty lemony and yeasty kick, super refreshing and quenching without any perceivable sweetness. We ended with the Frambozen which was incredible, just layer upon layer of flavor, subtly funky, lightly peppery, full vibrant Raspberry tartness, some lemon curd, jammy, layered. Very well done.

It is worth noting that the food program was incredibly well done, and matched very very well with the beers. Food was fresh, flavorful, and diverse, despite having a small menu. Often times breweries lack a food option, and while not explicitly a detriment, it does help to have food, and it is certainly an asset when the food and beer match up as well as they did here. Hand cut fries, seasonal salads, fresh breads, everything played off each other and was very cohesive with the beer list.

After our flight and lunch we were greeted by the smiley Josh Pfriem and invited upon  a tour of the facilities. I had briefly met Josh a couple of times before, most notably at the pFriem Bottle Release at Elizabeth Station. He had always struck me as smart, passionate, and creative, he has a storied past working locally at Chuckanut, and previously at Full Sail, he is fully entrenched in the beer culture in the Northwest and is walking example of what makes the industry here so great. We made a pit stop at the bar for a fresh Pilsner and Frambozen to enjoy on the tour, and we were on our way!

As evidenced above, the brewery is very much the focus of the space. The tasting room and restaurant are conveniently located right up front, but make no mistake, you are part of the brewery from any seat in the facility. We took no more than ten steps and we were at the brewhouse, a 15 barrel system pictured on the back wall, behind Josh here, you can see the grain mill above the mash tun. 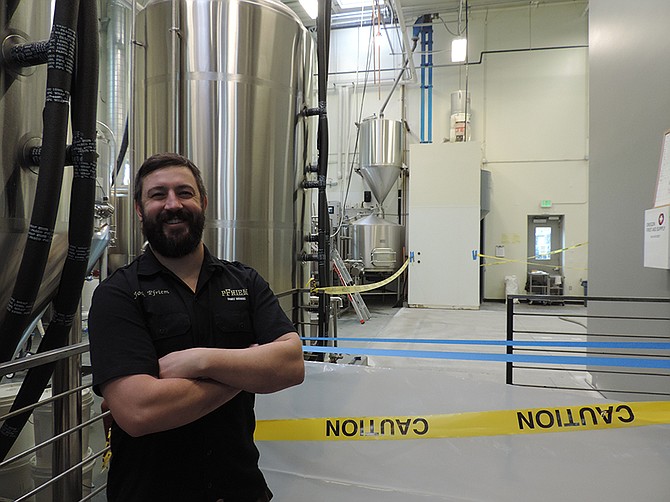 There were loads of shiny 90 barrel fermenters strategically placed in the brewery, they continue to grow, year after year. It was very interesting that everything comes through the 15 barrel system. Making it easy to create single one off pilot batches, while still being able to run 6 brews back to back to fill a 90 barrel fermenter with a fresh batch of Pilsner. Very much the best of both worlds, scalability is a great thing in brewing and it is a happy marriage in this case, making it easy to brew experimental styles, without sacrificing any of the core beers in any regard.

Out behind the building lies two large grain silos, one with Gambrinus Pilsner malt, a high quality malt hailing from about 500 miles north in Armstrong, BC, the other silo is filled with standard Two Row malt. Specialty Wyerman malts are stacked inside adjacent to the grain mill. As we move through the brewery from the production side to the packaging side, we are reminded by Josh of the family approach to the brewery. Everyone in the brewery is part of the pFriem family, everyone we encountered along the way had a smile on their face and was genuinely happy to be part of the process, whether it be mashing in brew number six for the day, cleaning kegs, or analyzing yeast samples. Everything worked cohesively and smoothly.

On the packaging side Josh told us about their centrifuge they utilize for the filtration of each beer. Flinging the beer through a centrifuge at 10,000 RPM’s sure helps the particulates fall out of solution without losing any of the integrity of the beer. Adjacent to the centrifuge was the cold side storage, loads of raw materials (hops, yeast), and freshly kegged beer were plentiful, as well as a new load of Apricots, for use in a future sour. This is the time of year when all the fruit starts coming in, leading way to more delicious sours and wild ales. Speaking of sour and wild, pFriem utilizes two large oak Foeders for their sour program, as well as two smaller stainless tanks. 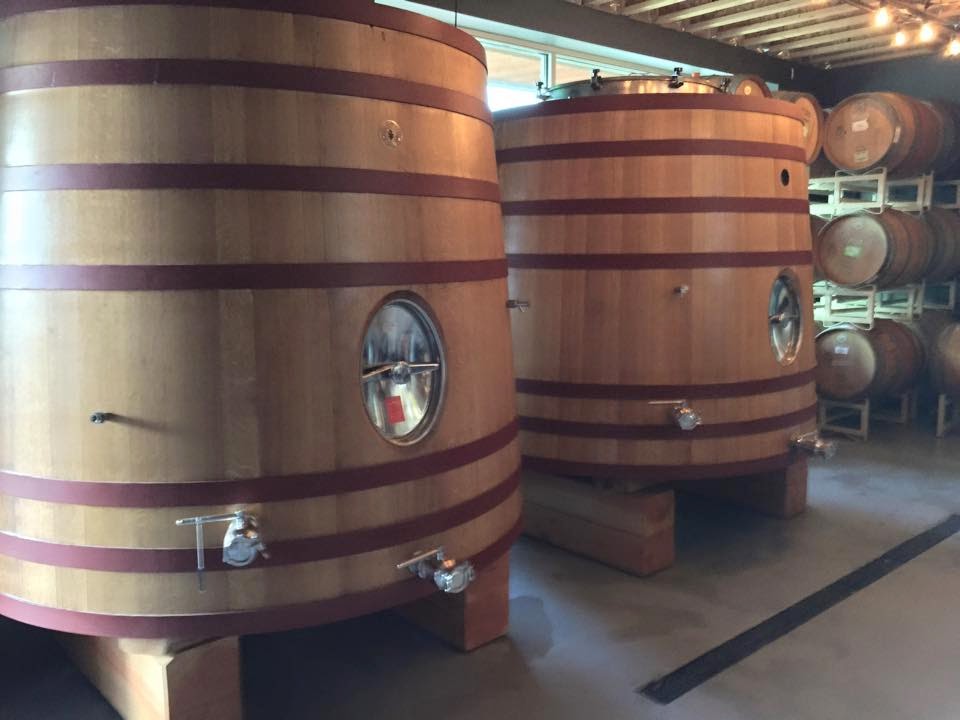 As we move from room to room we pass the lab and head into the barrel room. We tasted their Bourbon Barrel Imperial Stout this winter, and enjoyed in thoroughly. The number of barrels they have continues to grow, and continues to diversify. Wine barrels, yes, many. Bourbon barrels, yes, many from Heaven Hill and the like. There were some other awesome barrels in there, Macallan Scotch barrels, Cognac barrels, I felt like a kid in a candy store but alas, we’ll all have to wait. Like most good things, barrel aged beers take time. Keep an eye out for an emerging barrel program from pFriem.

We ended up in the newest part of the facility, which was a bit raw and mostly used for storing empty bottles and other packaging materials. pFriem has steadily grown to encompass the entire building. It was larger than I thought it would be, but still managed to feel small, well thought out, and eclectic. You could see the personal touches throughout the brewery, it didn’t feel cookie cutter, or standardized, it was unique and tailored to the family.

The highlight beers of the trip were the sours, the Frambozen, Peche, and Oude Kriek were fantastic, all offering vibrant fresh fruit notes balanced upon a slightly tannic and dry oaky funk.

To Josh and Annie, Kyle, Miriam, and the rest of the family at pFriem, thank you all for an awesome day, and thank you for creating some of the best beers in the region. To anyone passing through Hood River I strongly encourage you to stop in and check out the brewery. To anyone pondering what to purchase at the store, go ahead and grab a pFriem, whether you’re after an IPA, Pilsner, Wit, or Belgian Dark, you will find something to suit your fancy. The quality is top notch. I thoroughly enjoyed this bottle of pFriem Bretta throughout this review, a lovely lightly funky and fruity Brett beer that is infinitely refreshing and satisfying.