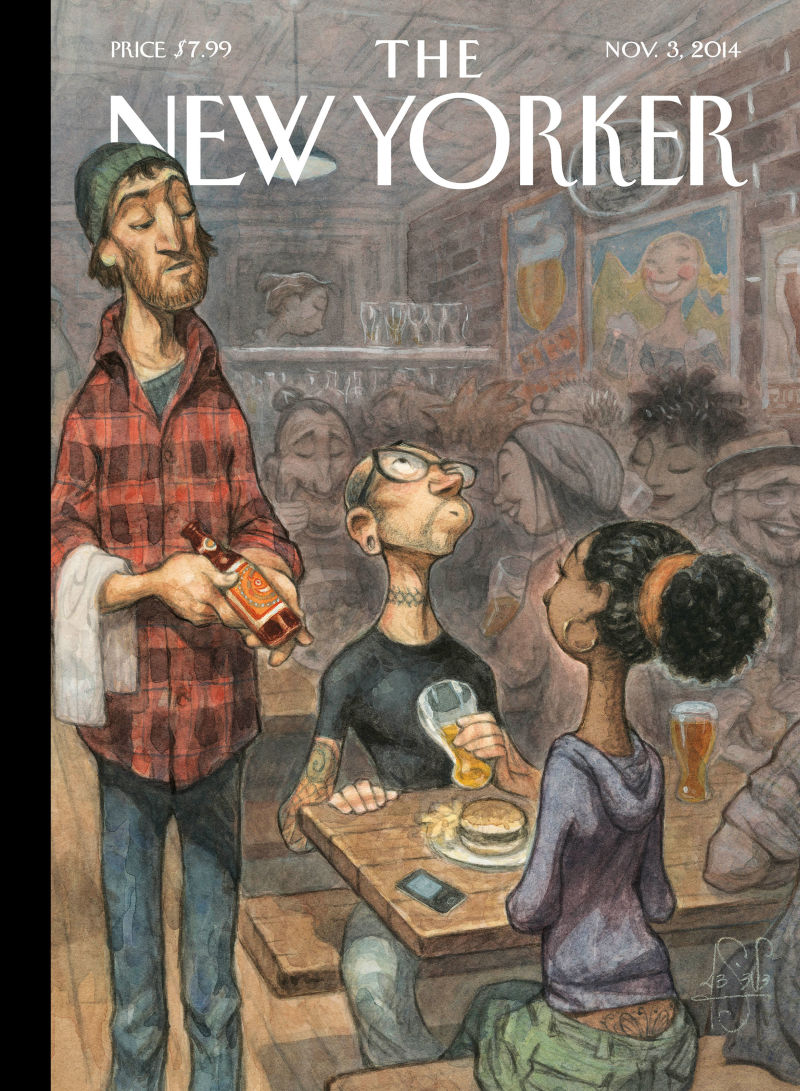 Current Cover of the New Yorker

The cover story reports that a Brooklyn restaurant became the first “beer focused” eatery to receive a Michelin Star. Yes, if you’ve watched Top Chef you’ll be aware the Michelin Star is the preeminent label of excellence in the restaurant world. The question is, “Has beer made it?” Long gone are the days where swilling a beer was a sign of blue collar pride in the face of bourgeois wine drinkers.

Beer has gone from being regularly served in American pints in American breweries to Pilsners being served in”proper” Pilsner glasses, Weissenbeer being served in a Weissen Glass, Belgians in a flute glass and on it goes. The nation’s, and more specifically the region’s, Beer IQ has been piqued, challenged and pushed.

Craft beer is slowly chipping away at the Coors, Buds, Heinekens and Coronas of the world. The Brewers Association just released it’s report on the growth of the craft beer industry in 2013 and it’s darn rosy:

“As a primary driver of growth in the beer industry, craft brewers saw an 18 percent rise in volume², representing a total of 15.6 million barrels, and a 20 percent increase in retail dollar value.

With increased awareness comes better beer, broader venues and a more demanding drinking public. With our diverse breweries we’ve already seen a fragmenting and expansion of our local beer drinking population. This is what happens when you enter the free market in a growing industry.

Even having the discussion of whether beer has made it, is an interesting thought to ponder.

It took 11,000 years, but beer made it’s way from fermenting grain on a peasant’s floor, to being drank by hipsters, in flute glasses in gentrified Brooklyn.

What do you think? Has beer made it and is it a good thing? Will the craft beer industry continue to chip away at the macro-brewery’s share of the market and push the beer industry towards a focus on craftsmanship? Or is the craft industry saddled by the inherent problem of society’s indifference, soon to slide back to mass produced mediocrity? Most importantly, when will this bubble stop, as all rides do?