The Major League Baseball season is upon us! Starting next week is the 162 game marathon baseball season that so many look forward to. Brats, bats and beers are waiting for you at your nearest MLB stadium. For craft beer lovers an MLB stadium can be the worst place to buy good beer. Most stadiums have a sad selection of beers for exorbitant prices.

Safeco Field, the home of the Mariners, is much different. Their craft beer selection reflects the beer that surrounds them. Considering you are at a Major League ballpark the cost of the beers aren’t all that bad either. They end up right in the middle of the pack. According to this list here are the best stadiums to buy craft beer.

Bellingham, count yourself lucky because sitting high atop in that #1 slot is Seattle’s Safeco Field, just 90min South. Let’s take a closer look at why the home of the Mariners is such a craft beer mecca. 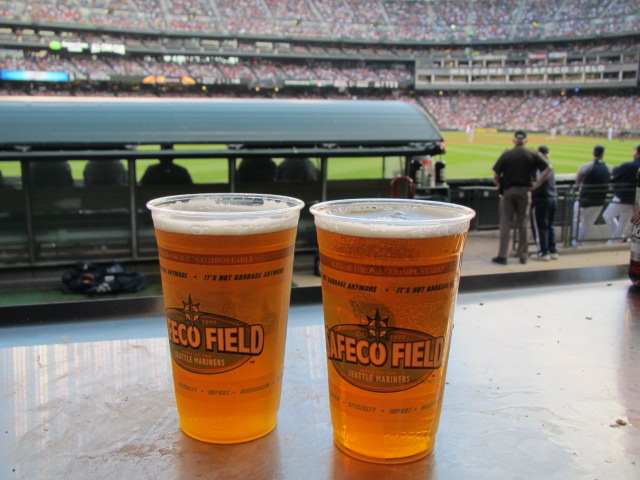 Nearly 70% of the taps at Safeco are dedicated to craft beer and that was a year ago. I’d expect more this year. The stadium has also brought in cask conditioned beer and you can expect at least three beer engines at the Main Concourse and Section 330.

Here is the beer list for the 2015 Season at Safeco Field in the Hit it Here Cafe. There are no Tap Trail breweries, but Skagit River Brewing, just to the south of us, is on there with these other great offerings:

Every Friday, Safeco will celebrate “Firkin Fridays” in The ‘Pen. This means a local brew master will offer up their beers for extended happy hours, starting when the gates open 2 1/2 hours before the first pitch. There are $6 pints, which, as we’ve shown isn’t too bad by MLB standards.

Here’s to a few games this season and the BEST selection of craft beer in the whole league. See you at the ballpark! While you’re there, sport some Bellingham Tap Trail gear!