Aslan Brewing Company brewed up Disco Lemonade, their version of a Berliner Weisse, and it has been very popular among Tap Trailers. It’s been so popular that people tell me they hope it’s the next beer Aslan puts in cans. Boundary Bay Brewing Company recently tapped their Citraweisse as well and it has received good reviews. Schweinhaus carries 10 Barrels

The Top 11 Berliner Weisse according to Paste Magazine 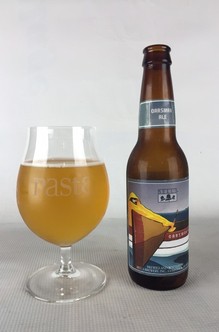 11. Bell’s Oarsman
City: Kalamazoo, MI
ABV: 4%
Key ingredient: Bell’s house yeast
The verdict: Oarsman is actually a pretty tasty beer, but it doesn’t really strike us as the best representation of Berliner weisse. Thanks to a very low level of tartness, it comes across as more of an American pale wheat that simply has a bit of a citrus zing—like a less chewy, more sessionable version of their ultra-popular summer seasonal, Oberon. We all actually enjoyed the flavor of Oarsman, but compared to the other tart, refreshing Berliners on the table it had a hard time getting through and stating its case. Several tasters referred to it as a “gateway Berliner,” and one wrote “not sour enough, but a good halfway house before you fully enter Berliner weisse freedom.” We’re not sure exactly where he’s drawing these metaphors from. 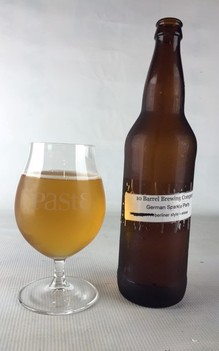 10. 10 Barrel Brewing Co. German Sparkle Party
City: Bend, OR
ABV: 4%
Key ingredient: Lots of lactic acid
The verdict: The exact flip-flop of Bell’s Oarsman—do not accuse us of simply voting for the most tart beers, or this one would have been a finalist. 10 Barrel’s entry is very much on the high end of the tart spectrum, which has become increasingly (and sometimes worryingly) common in the American examples of the style. It’s very clean, very crisp, very refreshing—but misses on the flavor components by not bringing enough weight and volume of wheat beer flavor to the party. It’s on the thinner side, and is missing an assertive “weisse” presence. You could appreciate it for the vinegary tart notes and citrus qualities, but pretty much all of the tasters found themselves looking for more balance or more flavor outside the lacto. 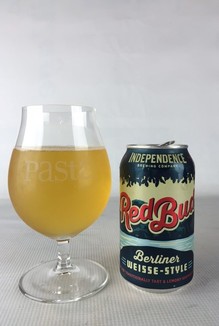 9. Independence Brewing Co. RedBud
City: Austin, TX
ABV: 4.5%
Key ingredient: Malt, oddly
The verdict: A right-down-the-middle, solidly made Berliner weisse, this offering from Independence had a little bit more traditional beer malt (not wheat) presence in addition to its Berliner characteristics. Mild to moderate tartness is right on point, with some sour lemon flavors. Clean, but seemingly lacking a bit of an x-factor to push it higher. 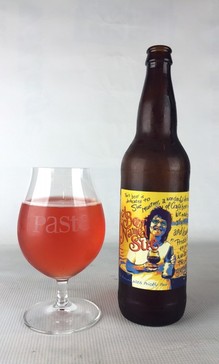 8. Cigar City A Beer Named Sue
City: Tampa, FL
ABV: ?
Key ingredient: Prickly pear
The verdict: A divisive beer in this tasting, Beer Named Sue was praised by some and criticized by others. Perhaps the most unique thing on the table, it has a bit of biscuit and citrus working under the surface, but good luck noticing those after you get past the huge prickly pear flavors. In truth, this Berliner weisse has the look and color of a watermelon Jolly Rancher, and multiple tasters also came to the same flavor comparison on their own—although they disagreed whether this was a positive or negative. Sweet and fruit-juicy, this is a Berliner weisse you should seek out if you want sweet fruit flavors. Or if you really like watermelon Jolly Ranchers. 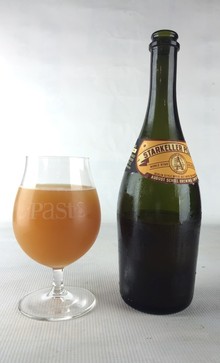 7. August Schell Brewing Co. Starkeller Peach
City: New Ulm, MN
ABV: ?
Key ingredient: 5,500 lbs of peaches
The verdict: We were frankly shocked when Schell’s hefeweizen performed so well in our 58-beer summer seasonals ranking, but between that and the selections they sent us for this tasting, it’s clear that the 155-year-old brewery still has plenty of new tricks up its sleeve. We wouldn’t have guessed that they would even be making peach-infused Berliner weisse, but I guess that’s what a background in traditional German beers will get you. The Starkeller Peach is very peachy—assertively so, and perhaps even a bit past the point of balance. It tastes ripe and acidic, like peaches in heavy syrup with a lower pH, and is rounded and sweet. Pretty heady for a Berliner weisse, but people who love sweet and fruity will love it.

6. Dogfish Head Festina Peche
City: Milton, DE
ABV: 4.5%
Key ingredient: Fresh peaches
The verdict: It’s funny to think that both the Dogfish Head and Schell examples feature peach, because they do it so differently. Where there’s absolutely no missing it in the Schell, the DF example is much more subtle and balanced. I’m not entirely sure, if I was drinking it blind, that I’d be able to tell you the fruit was peach specifically—rather than a peach candy flavor, what the fruit seems to contribute is a tartness-balancing, rounded fruity character. Neither the tartness nor the peach are really in your face—between this and the Starkeller, which you prefer will almost certainly be determined by if you’re looking for something richer and more assertive or quaffable and delicate. 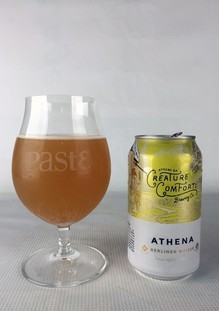 5. Creature Comforts Athena
City: Athens, GA
ABV: 4.5%
Key ingredient: Dueling yeast characters
The verdict: One of the best expressions of a classic-style Berliner weisse on the table, Creature Comforts Athena pours a murky gold, with lots of floaties and sediment from our can. The nose, unsurprisingly, displays some German yeast character alongside the tart and fruity notes, a pleasant reminder that this is indeed a wheat beer. Grainy flavors are met by light-to-moderate tartness and a solid citrus note of lemon zest. Right on the bullseye for the style, and very close to what has become the accepted and expected definition of “Berliner weisse” in American craft brewing today. 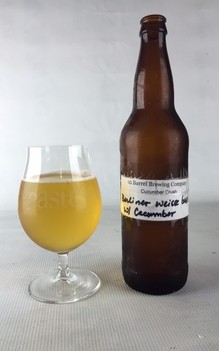 4. 10 Barrel Cucumber Crush
City: Bend, OR
ABV: 4%
Key ingredient: Cucumber, ya doof
The verdict: You really don’t have to look that far to find a cucumber beer these days—it’s an increasingly popular beer addition, especially in these lighter, tarter styles. 10 Barrel’s example manages to harness something that their earlier Sparkle Party misses, and the cucumber adds a refreshing, pleasant dimension. As one taster wrote, “Cucumber is strong on the nose but balanced in flavor.” From another: “Health? It smells healthy. It must be healthy.” And from another: “Like a carbonated cucumber water in a Thai restaurant, in a good way.” It’s honestly pretty damn refreshing stuff. If you enjoy cucumbers, this might very well be one where you could crush a full bomber yourself on the patio. After all, it’s only 4% ABV, right? 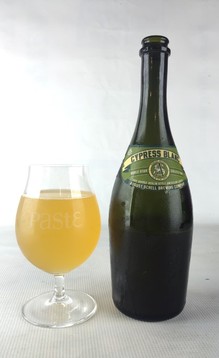 3. August Schell Brewing Co. Cypress Blanc
City: New Ulm, MN
ABV: 7.4%
Key ingredient: Brettanomyces and hallertau blanc hops
The verdict: This is really the one that makes us tip our caps to the venerable Schell’s. Who would have thought this brewery would be making imperial Berliner weisses with brett? This beer was aged for seven months in a cypress wood tank, which imparts some subtle woodiness alongside the classic funk of brettanomyces. One of the biggest impressions, though, is white wine flavors (think pinot grigio or riesling) imparted by the new hallertau blanc hop varietal. It’s lightly wheaty, crisp for its ABV strength, packed with citrus and tropical fruit flavors and utterly unique in the tasting. And it came from a 155-year-old brewery. We will not overlook August Schell again. 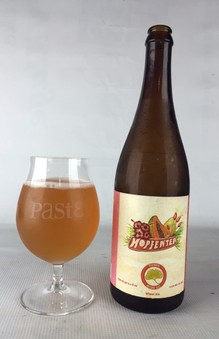 2. Perennial Artisan Ales Hopfenta
City: St. Louis, MO
ABV: 4.2%
Key ingredient: A “tropical tea blend”
The verdict: Perennial’s Hopfentea is a complex, unusual take on Berliner weisse—presumably it was a true-to-style Berliner at some point in its process, but it’s also received a treatment with a “tropical tea blend,” although we’re not entirely certain what that means. Regardless, it’s lightly tart and very fruity, with a complex blend of tropical elements that had the tasters guessing. From one scoresheet: “What fruit am I tasting? Is this pomegranate?” From another: “Fruit medley, but not cloying or artificial. Island weisse?” Impressively balanced, for everything that’s going on in it. It’s not what you would put forth as a classic example of Berliner weisse to someone, but it’s delicious. 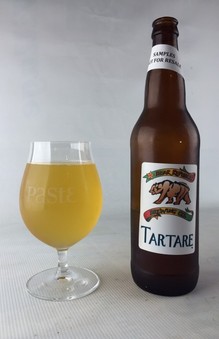 1. Bear Republic Tartare
City: Healdsburg, CA
ABV: 4%
Key ingredient: A metric ton of lactobacillus
The verdict: One whiff of Tartare is far and away enough to know that you are in for a face-puckering ride—the lactic acid is strong with this one, and it’s easily the most sour beer we had in this entire lineup. Regardless, it’s also an absolutely brilliant beer by any other system of measurement. There’s a blast of all kinds of crisp fruit flavors—green apple, white grape, and an almost salty characteristic that sticks to the lips, although this isn’t a gose. It’s chased by big lemon notes, as your taste buds dance (and possibly beg for mercy, depending on your tolerance for tartness) from overstimulation. If “bright” is ever an appropriate descriptor, this is certainly one of those times, because Bear Republic’s offering tastes like a metaphor for its brilliantly straw-gold, clear complexion—crisp, perfectly clean and vinegar sour. Assuming you have the fortitude to deal with the tart, it’s a summer experience you should go out of your way to seek out.